DO THEY UNDERSTAND THE COMMON MAN?

As I’ve stated before, I’m a political junkie. For a week, my attention had been directed toward the committee hearings for those individuals who had been selected to become heads of the various agencies. Those sessions were spectacles that left Americans all the more troubled about the future or our country.

For one thing, the nominees are wealthy folks. For instance, Betsy DeVos, the candidate to 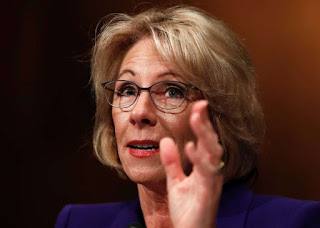 head up the Department of Education, has a financial worth of approximately $5 billion. Rex Tillerson, the State Department candidate, has approximately one-half billion dollars in assets. Even the Treasury nominee, Steven Mnuchin, is wealthy beyond what we regular folks can fathom. Now, wealth isn’t a bad thing, but it does bring up some questions.

I thought President Trump was going to “clear the swamp.” Instead, he’s merely replaced one set of rich people with another. I’ve yet to see a single candidate who is what I call an “average Joe.” These people have worked hard; I grant them that. However, I’ve worked hard all my life as well but haven’t come close to making a fraction of the fortunes these candidates have. No, I’m not the sharpest knife in the drawer, but like you, I’m not the dullest either. These proposed leaders have tricks up their sleeves for making huge sums, and they aren’t about to let us know what they are.

The problem with these leaders is that they just don’t understand the struggles of middle class folks. How could they? You and I work hard to pay for a home; we fret when a new car has to be purchased. Our depression deepens when we see the cost of health insurance. These department heads have no such concerns. They have the best healthcare; they live in mansions that would house our humble abodes multiple times; chauffeurs ferry them from place to place. Their children attend the best private schools and then go on to any college that they choose without fear of not being able to cover tuition. Their lives are so far different from ours that they can’t conceive of the daily worries that we face.

Many of these folks also have conflicts of interests. DeVos has long been a proponent of vouchers and charter schools and private schools. Neither she nor her children have ever attended a public school. She wants to take moneys from public schools so that children can use it for admission to a private school. In case you hadn’t thought of it, that money is taken from the funding of public schools. They will have a shortfall, and guess who will have to make up the difference: taxpayers. Your fair share will increase so private schools and charter schools can make money off students.

Steve Mnuchin owned a bank that foreclosed on thousands of homeowners who found themselves upside down after the economy went south in 2007. His bank foreclosed on one

elderly woman who had a short payment by 27 cents. Another homeowner was faced foreclosure because it was said she didn’t live in the house. However, when she was served with those papers, the processor handed them to her at the door of that residence.

Health and Human Services candidate Tom Price bought stocks in companies and then voted on legislation that proved to be advantageous to them. He denied that he’d done it directly, instead saying that a broker of his trust made the purchases. Then, under further questioning, he admitted that he contacted the broker with instructions to buy the thousands of dollars worth of stock.

Do these folks have our best interests in mind? I just don’t know. DeVos is dead set on crippling public education. She champions the use of vouchers that allow students to attend schools that have the same or less success rates with students. Rex Tillerson was

awarded a friendship medal by Russia’s Putin, and it’s not clear if he is in favor of continuing sanctions against the country for its hacking of our election and invading Crimea. Tom Price has long advocated the end of Obamacare, even though his new plan does not insure coverage for all people. Instead, he pledges to make coverage “available” for everyone, not assuring that anyone will be able to afford it. He also has pushed for cuts to Medicare and Medicaid. His plan is to cut $1.7 trillion from Social Security and Medicare.

Most probably, these rich folks will become leaders of the major departments. What they do might well affect the welfare of us common folks. I’m more than a little worried about the future. Some might say we must cut entitlements, and to that I say Social Security is not an entitlement; we have paid into the fund every time we drew a paycheck. It is a savings account that the government declared that we have. If our contributions had been wisely invested over the years, we’d have more than enough to see us through our senior years.

This is not a Democrat versus Republican issue. It’s a matter of qualified individuals leading the departments of government in such a way that takes care of ALL Americans, not just the wealthiest of us. Be vigilant and call them out when their actions aren’t in the best interests of the common man.