Mother Nature discovered that we humans were much too happy with the balmy temperatures occurring in January. She sent a surge of cold air back through the south the next month just to remind us what season it actually was and to dampen our spirits. It’s on these cold mornings that I remember life as a child. More to the point, I recall the breakfast menus that we had at home.

Mother had a job each day of making sure three boys were out of bed. Jim was not such an easy one to awaken, so Mother would speak to me and and instruct me to “wake up your brother.” During our early years, we ran barefooted across wood floors to the coal stove in the living room. There we would dress quickly because the house never warmed by that one stove.

We’d make our ways to the kitchen afterwards. Most mornings the only light that was on was the one on the top of the stove. The oven was warming, and we stood in front of it to thaw out just a bit. Before she went to the one bathroom in our house to get ready for work, she’d made breakfast of 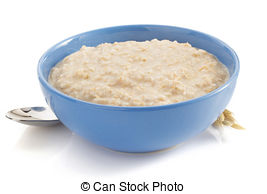 Oatmeal was always good to start the day. We dumped half a truckload of sugar and a boulder of butter into the stuff and stirred it together. Before long, the sugar rush hit, and we bounced around the house for the rest of the morning. Little did we know that in a short time the sugar would be gone and that we’d crash and burn.

Sometimes, Mother made cream of wheat for breakfast. No matter how hard she worked, the gruel always had lumps. We’d dish out a helping of it and once again add

sugar and butter. However, no amount of additives ever dissolved the clots in our bowls. We ate around them or held our breaths before biting into one of those disgusting things. 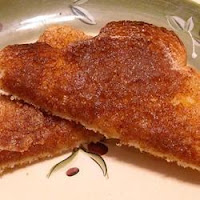 The best weekday breakfast item was cinnamon toast. Mother spread butter on each slice of white bread and the topped them with cinnamon and spoonfuls of brown sugar. After a few minutes under the broiler, the toast was ready. I still remember the taste, but for some reason haven’t been able to recreate it during my adult years.

On weekends, breakfast became a feast. Mother took the time on Saturday mornings to fry bacon or link sausages. Then she’d mix up a bowl of batter and cook stacks of pancakes. Even better, sometimes she pulled out a big, heavy contraption and make waffles for us. The taste of those waffles has never been reproduced anywhere.

We’d take our mounds of food to the table and “doctor” them. Sometimes, we turned the bottle upside down

and wait as a small river of white Karo syrup oozed over the pancakes. Not until a few years later did we ever taste dark syrup. On occasion, one of us would retrieve a jar of homemade blackberry jelly from the refrigerator. Globs of the stuff were dumped onto plates, and then they were slathered over every inch of pancake.

These days, breakfast is much healthier. Amy and I eat eggs with a couple of slices of bacon. On some mornings, we simply grab a bowl of cereal before heading out the door. Yes, on rare occasions, we even make a run to Hardee’s for something. None of it equals the wonderful tastes of things Mother prepared that remain in my memory. I suppose the dash of love that she added to breakfast items made the so good, and maybe one day, I’ll see her again and ask if she has time to make me a stack of waffle...just one more time.