One of our church’s new stained glass windows made by Leslie Little reminds my wife of a quilt. The patterns on it are similar to those used for generations by women who have sewn the covers. I’ve never met a person who didn’t love quilts or who didn’t want one or more.
When we were young, Mother covered our beds with quilts that her mother or grandmother had sewn. Back then, quilts weren’t considered art. Instead, they were necessities for families. Cold weather arrived; money was tight; the best way to keep beds warm was to take scraps of cloth and 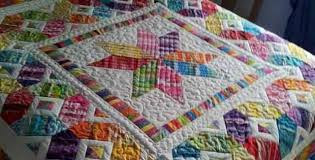 bind them together on a backing and then stuff the whole thing with some kind of material that might knock off the chill.

We all had quilts and never thought much about them. Sometimes, we would strip them from the bed and use them as mats for wrestling matches in the living room. We also drove our toy cars across the terrain of the quilts and made believe we were in the desert or some other wild place. My brother Jim wrapped himself in his quilt before slipping into a night of violent sleep where he stretched and kicked and yanked the material.
My mother made quilts for years. It seemed to us to be a torturous activity, but the projects provided her hours and days of entertainment. She’d spread out the batting and material and scraps and put them together while watching an episode of “Matlock.” Her bony, crooked fingers worked needles through layers of cloth in intricately created stitches. She wore a thimble on the one finger that was most in danger of being stabbed with those needles.
Even in her last months, Mother sat on the enclosed porch off the kitchen. She worked on a hobnail quilt that was the most intricate pattern she’d ever tackled. Sometimes, her shortness of breath forced her to put down the work, but she never quit for long. Many evenings Mother sewed until she was exhausted, and at that point, she’d pull the project around her, lie her head on a decorative pillow and 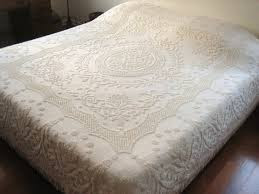 sleep until the next morning.

By the time Mother passed, she’d made a trunkful of quilts. She made sure that each of us boys had one and that her grandchildren had the chance to choose one. They are special items to us all. More than anything, those covers represent the love Mother had for us and the dedication she gave to making these special items. Hours of her life poured into the making of the quilts we now have, and in some small way, they keep her a bit closer to us, even though she has been gone more than twenty years.
Today, folks shell out piles of cash to purchase a handmade quilt. At any estate sale, the first things that are sold are those patterned bed covers. Yes, quilts are special to most folks. They are even more important to family members who have one made by a mother or grandmother.
We probably should use them for everyday use like the one Jim did years ago. That might be the biggest compliment we can give to the maker of the quilt, but doing so might wear them out and leave us wishing we’d have preserved that special item produced by our loved ones. So, many quilts are hung on racks for decorations or are stuffed in chests for safekeeping. I suppose the main thing is to enjoy a piece of artwork that can even be used in a utilitarian ways.

Polls show that more and more Americans believe in the theory that the government is being influenced by “the deep state.” Those same polls show that nearly 3 out of 4 individuals don’t know what “the deep state” actually is. The situation is just another example of citizens surrendering their God-given ability to think. That failure to think can have serious consequences.
Most of us have simply become lazy. Instead of researching a topic through reading and exploration, we allow all sorts of electronic media to do our thinking for us. How many of us are guilty of watching 24-hour news stations and blindly accepting what its commentators, whether liberal or

conservative, say? If a person is a Fox Network fan, he isn’t about to listen to a different point of view that airs on CNN. The same holds true for those who choose CNN as their news deliverer.

Social media delivers too many individuals’ news. Facebook, Twitter, and Instagram all shotgun news bites and ads and links with information we might find interesting. Of late, the discovery that Russians and even some political factions in our own country have corrupted those outlets with misleading stories has come to light. Still, too many people take the bait and swallow made-up lies as gospel.
Even more of us unquestioningly accept information from the Internet. I’ve heard so many times individuals say that something is a fact. When I ask how they know that, folks reply, “It says so on the Internet.” People have assigned the same divine qualities to the Internet that they give to the Bible or the Koran.
The simple truth is that too many of us have grown intellectually lazy. We don’t have the desire to discover for ourselves. Reading isn’t on the top ten list of activities. As children, most of us found great joy and entertainment as we delved into a topic to find as much information as possible. As little ones, we made buttercup flowers from egg cartons and painted them a beautiful yellow to celebrate spring and the coming of Easter. In fourth grade, we students worked in groups to build replicas of the Matterhorn and report on Switzerland and the Alps. In 6th grade, Mr. Fowler instructed all of us to make a scrapbook of the events of John Kennedy’s assassination, which had occurred in the fall of that year. I still have pieces of that project in a drawer somewhere.
The safeguards against foreign intrusions and subversion are continued pursuit of the truth. That comes when people invest in reading and examining information for themselves; they never merely take the word of a third-party source. At the same time, a well-informed person listens to both sides of an argument and finds the salient points from both.
Our country is more polarized each day. Folks buy into the side they like and close their minds to anything the opposition proffers. Such single-mindedness leads to a loss of moderation, and in the end, paralyzes leaders from acting in the best interest of the entire country. The time has come for each of us to reclaim our intellectual curiosity so that we no longer can be blindly lead to believe that only one answer is the right one. We owe this to ourselves and to our children. Otherwise, an authoritarian form of government will take over because of our laziness and lead us far from the democratic principles that Americans love.

I'LL DO BETTER FROM NOW ON

Well, March Madness became just that for Tennessee fans. In the span of 24 hours, both of our favorite teams exited the NCAA tournament. During the same timeframe, the Vols baseball team lost two games to Ole Miss. Ouch, it was rough weekend and a terrible way to end Spring Break week. Like most fans, I wavered from disappointment to anger. I wanted all of these 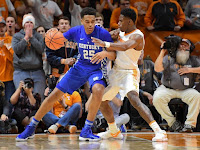 teams to continue to succeed.

What hit me squarely in my conscience is how terrible I act in the face of losses. The men’s basketball team seemed not quite so inspired in their game against Loyola. Of course, that could be in part because the opponent played well and defended closely. I tried to call out the refs for glaringly
incorrect calls, but that fact is becoming part of the game now. I fumed about the breaks to review plays and swore that they killed UT’s momentum.

I turned on the Lady Vols game at half time, and before long, I watched as Oregon State shredded the defense for easy lay-ups. I questioned offensive sets that had players making ill-advised passes and 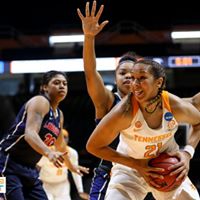 attempting shots that were sure to be blocked. On some plays, I growled about the lack of hustle of some players who couldn’t get up and down the court like the others. At the end, I changed the channel because I couldn’t stand to watch the women’s first NCAA tournament defeat on their home court.

The baseball team took a stunning win from the Rebels on Friday night. They had timely hits and good pitching and defense. On Saturday and again on Sunday, Tennessee bats went silent. I wondered where Friday’s aggressive at-bats had disappeared. On several occasions, I begged batters not to give up on pitches or to 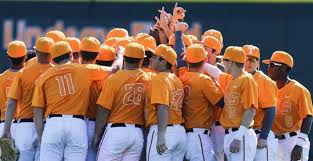 catch up to fastballs. The weather for the weekend series was as gloomy as the performances in those last two games.

At some point, I took a deep breath and saw things more clearly. The men’s basketball team proved all the prognosticators wrong by sharing the SEC title instead of coming in 13th. That team has the finest collection of players that the school has had in years. The athletes play hard and never give up. Even more impressive is the way they speak and conduct themselves. They are my favorite UT athletes, and I thank them for the thrills they gave us fans during the season. I can’t wait to watch next year’s team.
I’m not as sure about the women’s team because I’ve not watched them that often. Some say the team is young; others state the coaching isn’t up to par. What I do know is that these women want to win. They have the talent to do so, and in most games, they performed well. Because the season is a grind, on some occasions I suppose they were tired and their want to was more than their abilities to do. The team did have success, and a year’s maturity will make them better.
The baseball team is young, and its coaching staff is new. No, those aren’t excuses for losing games, but they are factors in success. Not a single player goes to the plate intent on striking out. They want to hit the ball, round the bases, and score runs. The ability to hit a small white sphere traveling 90 mile per hour with a rather slender metal instrument is impossible for most of us. When an off-speed pitch follows, it’s a wonder that batters don’t screw themselves into the ground going after it. These players are gifted athletes who do their best to win games.
I’m going to remain a fan; however, from now on, I’m going to give the players a break. I’ll cheer their successes without bad-mouthing their shortcomings. After all, only a handful of them are old enough to be called adults. A true fan’s job is to encourage players, not rip them to shreds with negativity. I apologize for having been so critical. I’ll do better from now on.