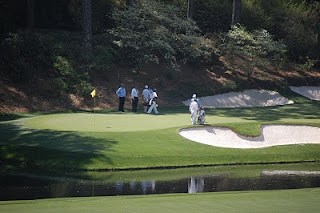 This is a piece that I wrote for the paper. It only made in one edition, so I'm sharing it with everyone. I've also put in a picture.

The Masters Golf Tournament is an event that everyone recognizes. It fills up television screens with some of the most beautiful landscape anywhere on the planet Earth. The behind the scenes planning and the staffing help the week-long tournament to run smoothly.

Huge crowds are present each day. A sea of people covers the course. Eighteen holes cover approximately 6925 yards, and the rest of the property easily dilutes the mob. That’s not the case on the outside. Traffic snarls as early as 6:15 a.m. as people make their ways to the course. Fans come from around the world, so hearing a variety of languages is no surprise.

Every aspect of the Masters Tournament is run like a well-oiled machine. At the gift shop, crowds grab items from shelves and stuff them into small baskets. As soon as an item is taken, an employee restocks the shelf. At the check out lines, several registers are attended with employees who ring up merchandise while others place the items in bags. Many of the better known retail stores could take lessons on providing such service.

In the men’s restroom, as many as ten employees are on hand to help. Two men stand at the front door and make sure the crowds don’t become too large at one time. One instructs, “Squatters to the left, standers to the right.” In one restroom, a leaking sink was fixed by a maintenance worker who made sure not a drop of water hit the floor. Not a single paper towel touched the floor for more than a couple of seconds before it was snatched and deposited in a receptacle. UT fans can only dream of that kind of help in Neyland Stadium.

The costs of items vary for the Masters. Practice round tickets are inexpensive for those who win the lottery. However, scalpers line the sidewalks and are only too eager to charge exorbitant prices to others looking for admission. Like any place that draws large crowds, souvenirs were over priced. I put my hand on one sweater that cost $450 but quickly removed for fear of pulling a thread. Food is cheap. Most soft drinks and sandwiches cost $1.50. Beer was only $2.75. The lines moved at all times since enough registers were opened to accommodate customers. Compare that with prices and slow moving lines at most ball parks.

Most impressive of all was the behavior of patrons. Cheers went up for miracle shots. Yet, when a player prepared to hit the ball, a pall of silence fell. During most of the time, people spoke in low voices. At the same time, folks were polite. A lack of urgency, panic, and anger was evident. Folks were there to enjoy the day, soak in some of the most beautiful landscape anywhere, and be entertained by the world’s best golfers. No one would describe places like Dollywood the same way.

The golfers entertained the crowds. Phil Mickelson won his third green coat. The service was splendid. All those things led to an easy going pace day in the sun on the most famous course in golf.