As Amy and I ease toward retirement, we make changes to things that have been fixtures in our lives. We’ve meted out some of the items that Mother kept in her house. Amy gave herself permission to clear some possessions that she thought might be essential in earlier years. Maybe the biggest change to come is our choice of a new bed.
After we married, we slept in a full-sized bed for years. Over that time, we had several different frames and headboards. One of the first was an antique that I discovered. For several days, I worked to strip the coats of paint that had baked onto the surface by the heat of the barn in which it had been stored. The headboard was approximately six feet tall and rickety. We never knew if the thing would collapse in the middle of the night.
Mother gave us the bedroom suite that she and Daddy first bought. The headboard and footboard mirrored each other, and two dressers and a night stand completed the set. I remember as a small boy that I climbed in that bed when a scary dream woke me and sent me hustling to their room. Our children lay in that bed when they were little as well. Dallas especially enjoyed piling in the bed in the mornings and cuddling with his mom for a while. His fitful sleeping sometimes sent me in search of a place to finish a night’s rest.  At some point, we fitted that bed with a queen-sized mattress and rigged the headboard to fit the frame.
A few years ago, Amy bought a new bedroom suite. The old set was moved to Dallas’ empty room. It included two nightstands, one dresser on which the television sits and another monstrous dresser with a mirror mounted to it. Our bedroom seemed to have shrunk. The headboard was oversized, and not long ago, we moved the bed to Lacey’s vacant room.
We next bought a headboard and footboard from a Habitat Re-store. They had a much lower profile and didn’t overpower the room. Again, I tried to fix them to fit the frame for the bed, but the pieces jiggled and shook, and I was sure that they’d fall or break. 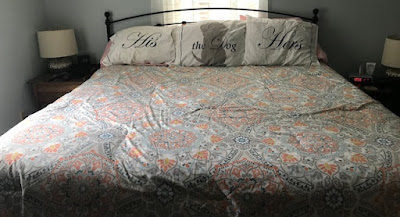 After more than forty years of marriage, we’ve bought a king-sized bed. Our decision was that both will sleep better if we have a bigger bed that doesn’t ripple with movement every time one of us rolls over. The real reason for a new bed is the dog. Sadie sleeps with us. She might start at the foot of the bed, but before the night is over, she’s moved between us or has stretch across the bed so that we cannot straighten our legs or pull up the covers.
Maneuvering in the room will become even more difficult, and my main worry is that I’ll stub my toes on the frame. Amy will eventually find the right kind of headboard for this new bed, and of course, new sheets, blankets, spreads must be bought. However, my tired, worn out body is looking forward to having enough room in the bed, unless our third sleeping companion still chooses to stay in close contact.

When I was a little boy, I had one friend. My twin brother Jim and I were inseparable. We played together, fought together, and took up for each other. Sixty years later, we’re still “tight” and try to spend time with each other as often as possible. Other friends came later as I grew up and extended my world passed the front yard.
Back in the day, kindergarten was something that rich kids attended. The first educational experiences for most of us came the opening day of first grade. Jim was in a different classroom, so I was on my own. Little by little, I ventured out. Even today, I remember some of the first friends I made. Steve Buffalo and Steve Cox were buddies. We played together during recess and sometimes sat together in lunch.
Throughout elementary school, other boys became friends. Joey Wallace, Bill Jones, Pat Wright, Tommy Robinson were just a few of them. Our yard was home for football games and baseball games after school. We visited each other’s houses and even spent the night. Oh, fights broke out; in fact, every game we had at some point was interrupted by two boys throwing punches. Then it was all over, and we returned to the games.
High school introduced other new friends. Many of them were in band. Ken Mills, Mark Large, and Randy Allen were just three of them. We had good times after practices and on the weekends. Some of us managed to drink alcohol that wasn’t legal for our age. It’s a wonder that we lived through those times.
Unlike most folks, I didn’t make many friends during college. My time was spent studying to make up for a lack of educational dedication in high school. I met a couple of girls in English classes who became friends. Not until I began dating Amy my senior year did I meet my best friend Doing so has proven to be the most defining thing in my life.
I’ve made a friend or two during my adult years. Most are folks I met on the job at school. Bob Shoemaker was a good friend for years; Glenn Marquart was another buddy of mine, and Joe Dooley is now a solid friend. Others were Jim Pryor, Bobby Campbell, and Frank Kennedy, and we spent plenty of times shooting the bull and laughing during planning periods, before, or after school.
I also made some friends as I worked part time jobs at Budget and Knoxville Toyota. We worked hard and eased the times teasing and laughing.
My two best friends, yes, I have two of them, are Doug Meister and Billy Hayes. I’ve known both of them for over thirty years. We’ve played ball together and coached ball together. I can sit with them today, and it’s as if we’d never been apart.
What I do know is that most of the people with whom I made friends are still special folks to me. I might not see them for long periods of time, but all I would need to do is call them, and they would respond instantly. Some of those good friends have passed, and I miss them. The ones still here make the void smaller.
It might do this world well to recognize that we have only a handful of good friends in our lives. They are the ones who accept us even with all of our faults. No one should ever take friendship lightly; no person should set out to shame or degrade any friend. Losing a friend is a terrible thing because replacing him might prove to be impossible. To have a friend means to be a friend. That is a good motto by which folks and countries should live.

A VIEW OF THE FOURTH

I intentionally waited to write this until the day of July 4th. It’s not so much because I am lazy, but in the world today, things occur so quickly that I’m never sure whether the events on which I comment will prove to be true or false. At this point, however, I feel safe thinking that these things are real, at least for today.
To begin with, it’s hotter than a $2.00 pistol. The whole week has been crammed with days in the 90’s, and someone said yesterday the temperature, not just the “feels like” temperature, hit 100 degrees. Here’s a new flash: it’s summer and supposed to be hot. Humidity can also be added to the 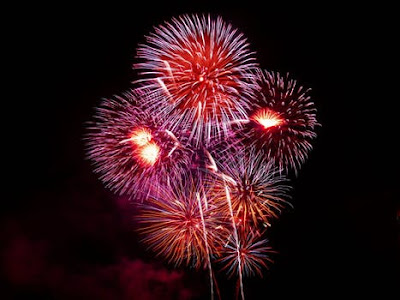 mix here in East Tennessee, and that makes for sweltering summer days. That’s why plenty of folks spend their days on at pool or lakeside. Some are even lucky enough to make it to a stream in the mountains where the real cold water is located.

We’re celebrating Independence Day, and the economy is humming along. Employment is at record low levels, and companies are beginning to run out of folks to work. It wasn’t too long ago that people had to scramble to find part time work, but now things are much brighter for Americans who need a job.
I’m not so sure how the economy will be affected by the dump truck load of tariffs that we are imposing on friends and enemies alike. Those measures are being met with tariffs by other countries, so the prices of goods will begin to climb. That means the tax cuts that we might have seen in our paychecks won’t offer extra savings or more purchasing power; instead, we’ll wind up shelling out the money in an effort to at least keep even. It seems to me that we might aim any tariffs at enemies and not at our friends with whom we have small or nonexistent trade deficits.
Immigration is causing problems for the entire country. I certainly agree that we need to develop a workable immigration policy. That would include an orderly flow of immigrants into the U.S. and a workforce to fill some of the positions that are dependent on migrant workers. However, this country cannot continue to take children from their parents when families cross the borders. Yes, in some situations, those folks are breaking the law, but we are a nation founded on immigrants. Taking children from moms and dads is an immoral act that defeats the ideals upon which the U.S.A. was built. In short, we are better than that.
The news outlets of the nation are not enemies of the state. If that were true, then the Knoxville Focus would be your enemy. Do you feel that way about this paper? Sure, some outlets report things I don’t like, and I’d rather not see the spin put into news stories. The reason for so much conjecture and opinion in some places is 24-hour news cycles. Really, how much can a cable news say about the same story? To keep the cameras on and the ads selling, networks must add stuff. Hey, we’re supposed to be an intelligent citizenry, so we should be able to tell the difference between fact and opinion. However, we need a free press; it’s one of the most crucial elements to a democracy. If you don’t like what an outlet says, don’t listen or watch, but at least recognize its right to exist.
I’m worried about the days ahead. We are fighting with friends, dealing with countries that tried to influence our elections, and cutting deals with regimes that have lied for years. Polarization stifles the government’s ability to work for the people. My wish for this Fourth of July is that common sense and love of country replace such adversarial roles. How about we all try to meet in the middle and moderate our views for what’s best for the country? It might work since nothing else seems to have.