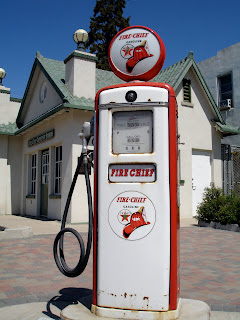 The country is in the midst of an economic funk unparalleled since the Great Depression. A hurricane that just wouldn’t go away compounded the problem. Throughout it all, however, the major oil companies continued jacking up prices and sticking it to an already weary American people. They’ve done the deed through several means.


First, the oil companies preach that shortages occur as changes in seasonal blends are made. Hmmm. We understand that some differences in gas might come with changes in temperatures. It makes sense to the driving public. What smells like a garbage can filled with day-old fish is the fact that the more expensive blends come in the summer time. It’s the same season when folks do most of their driving as they travel for vacations and holidays.


Some of us equated the changes in blends to the options that car dealers presented to customers. Remember being offered undercoating? As customers discovered, cars don’t need it and are sprayed with some protection on the assembly line. The difference in the option and what is done in the factory has been the butt of jokes. Some say production undercoating is sprayed while the worker stands on his right foot; the optional “protection” is sprayed while the worker stands on his left foot. Is something like that going on with gas so that the oil companies can raise prices?


Refineries have closed for one reason or the other. Yes, one fire caused a closing, although I question how big the blaze was and how much damage to a giant refinery occurred. Why else would these plants close other than to claim a shortage that ups prices at the pumps.


Hurricane Isaac slammed the coast with winds and rain. All of us can hope that damages were minimal to the cities and towns in its path. Closing down the oil platforms is understandable as well, if they aren’t shut down for an unnecessarily long period. Yep, production might be halted for a couple of days, but no one can convince drivers that those temporary shutdowns cause shortages of supplies that demand a jump in prices of nearly fifteen cents per gallon. By the way, weren’t the gas supplies in the pipeline and the gallons in tanks refined at a cheaper price than the one stuck to the consumer a couple of days ago?


Oh, we’ve been told how wonderful BP is and how the company has spent millions to clean up the Gulf. I always thought that someone who makes a mess is SUPPOSED to clean it up. We see what their efforts have done on the surface, but what irreversible damage is present in the waters below? By the way, BP isn’t paying for a single bit of clean up. The consumer is paying big time for the company’s reckless, negligent procedures and actions through soaring prices for each gallon of gas.


I, for one, am tired of the chokehold oil companies and oil-producing countries have on the . It’s time for our country to take action. Perhaps the biggest disappointment of the Obama presidency is the failure to make any meaningful progress developing alternative fuels. We need to break the chains that tie us to oil and to countries that hate us and companies who soak us, even in the worst of economic times.


My hope is that the elected president in 2012 will demand that alternative fuels be developed and produced within five to seven years. The has the intelligence and technology to do it. Don’t buy the “loss of job” argument that Exxon or BP or any other oil company cries. New fuel sources and the implementation of their use will spark an economic growth that will produce millions of jobs, maybe even more than an oil pipeline that cuts across the country could do.


It’s time. Are we up to the challenge? Our future depends upon it.
No comments: Links to this post