Christmas time is at hand, and I’m proud to say that my shopping is complete. Of course, I only buy for my wife; I don’t think Amy trusts me to buy for others. My extravagance would cost us too much through the rest of the year. I don’t need to be the one who needs to buy presents for others because I already have plenty of difficulties shopping for just one person.
Years ago, I had to learn about buying presents for a woman. Sure, in elementary school I bought six-foot stuffed snakes, and in high school a bottle of cologne and an inexpensive locket on a chain worked fine. The rules change after marriage. We’d been married five days when that first Christmas arrived. I bought what I thought were wonderful gifts. The one of which I was proudest was a set of hot curlers for Amy to use in her beautiful hair. She opened the box, and the fallen look on her face said it all: I messed up badly! My first lesson about buying presents for wives was that they aren’t to be practical ones. Things such as vacuum cleaners, appliances, or pots and pans lead a man straight to doghouse for the next twelve months.
On other Christmases I’ve given furniture to Amy. Usually, those items have been things that I have worked on for a long time. One year I bought an old cedar chest. I brought it home, stripped, sanded, and refinished it. Another time I bought a new rocking chair and stained it. Amy used that rocker to feed her babies and rock them to sleep. Both items mean a great deal to her; they’re heirlooms that she will pass along to the kids in years to come.
I next learned the secret to a good Christmas present. When our daughter was about one and a half, a picture of her was taken, and it was beautiful. I found an artist who completed a huge colored chalk sketch of that picture. Amy tore the paper from that present, and the moment she saw it, her eyes welled up with tears. I knew that the present was a good one. I haven’t struck that nerve many times over the years, but nothing feels better than when it does happen. Men, always try to get something that has the ability to pull your wives’ emotional string. You’re an instant hero if that happens.
I love to Christmas shop for Amy. I’m not so sure that women shoppers are so delighted to see me though. For several years I bought clothes as presents. I didn’t take the first thing I came to. Instead, I’d walk among the racks of clothes and occasionally stop to pick up an item. I envisioned Amy in that piece of clothing. Sometimes hours were spent looking for just the right blouses, slacks, skirts, and suits. On Christmas morning Amy opened each box and oohed and aahed enough to make me glow with pride. However, I am not as stupid as some might think. In my jewelry box at home were the receipts for each item. Amy made sounds over the fact that I had spent that much time to find the presents. Many of them were returned the next day, either because they didn’t fit properly or they didn’t suit her taste. I still got brownie points for the effort that I’d given.
This year I visited a jewelry store in search of the perfect pendant and chain. I found it after scouring the cases. A diamond circle pendant on an eighteen-inch chain was what I bought and returned home. Something bugged me though, and I looked in Amy jewelry cabinet when I got home. There it was, the same item I’d just bought. Amy already had a circle pendant, and what’s worse, I’m the one who bought it last year for Christmas. I realized that a man must keep notes on what he’s bought his wife over the years. After thirty-two of them, a guy forgets.
I have a stash of presents for Amy, and with any luck she’ll like them all. Then I can begin planning my list for next year. I just hope I can remember what I bought and won’t duplicate them. Some day I might have to take Amy with me so that she can pick out her own presents, and the fun will be gone.

John Thacker and his crew came to help me build a porch this past weekend. John builds the most beautiful cabins imaginable, and he has agreed to guide me through the construction nightmare. After the first weekend, the realization of how little I know about construction is evident.
My education at the foot of the master began immediately. A month earlier, John directed me to dig holes for the post. Each was to be sixteen inches in diameter and two feet deep. I dug for most of two afternoons to complete them. The codes inspector came by and told me the holes needed to be twenty-three inches in diameter, so I again grabbed my handy posthole diggers. When he arrived John peered into the holes and barked, “These holes aren’t more than twelve inches in diameter. It seems that my perception of straight isn’t correct. I began the holes at the required size, but they narrowed as I dug deeper. So, the first order of business was to resize each hole. The other workers who arrived weren’t exactly happy because they too would be correcting the mistakes on what was to have been my job. I was embarrassed enough without John riding my back for the next half hour. Eventually, however, he let up when other things needed his attention.
I next learned about weight of materials. A four-by-four post is plenty heavy. However, a sixteen foot, six-by-six post is more than double in weight, or so it seems. Treated lumber is also much heavier than framing lumber. Toting those posts to the holes, raising, and setting them are tasks that requires four of five men. Eighty bags of concrete, each weighing eighty pounds, were poured into the holes to stabilize and set those thirteen poles. Lugging those sacks of dead weight to the holes quickly became back-breaking work. Nearly five-hundred pounds of the mix was used for each pole. I thought about all the guys who spend hours lifting weights so that their bodies are lean and cut and massive. They do all this and produce nothing. Maybe body builders should instead work construction. If they’d lifted 6400 pounds of concrete, I figure their muscles would have been just as bulging, and at the same time these guys could have earned some cash.
Precision is another necessity in construction; at least it should be. John and Ron, an older man who’s put in years as a construction worker, are as picky as any people in the business. After each pole was placed into its hole, measurements were taken to make they were seven feet, six inches apart. A long, heavy metal rod was used to maneuver the poles into the correct position. Sometimes that meant moving these monstrous things no more than one-sixteenth of an inch! When each was in the precise place, it was checked for plum on each side. Then bags of concrete were poured, and the rod became a tamp to pack in the concrete, especially next to the pole to keep water from reaching it. To anchor the post while the concrete set, two-by-sixes were screwed to it and then to the house. When the men finished setting and bracing them, the end product resembled the ruins of Stonehenge. 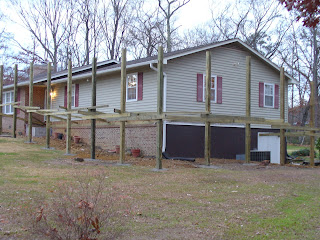 The next part of my education concerned anatomy and physiology. I’d arisen at 6:30 that Saturday morning and had already moved materials and raked smooth the dirt removed from the holes. Most of the soil was wet, so red clay became clumps that weren’t easily broken apart. Having to dig holes deeper and then spread even more dirt with a rake proved to be a frustrating task. All of the work I did that day exercised muscles I don’t normally use. In fact, on several occasions I paused while muscles in my arms, chest, and legs twitched, spasmed, and cramped. After the day ended, I took a shower and relaxed as much as possible. I was amazed at the direct correlation between strenuous exercise and an aching back and cramping legs. Sleeping that night proved to be impossible too. I simply was too tired to sleep.
My education in construction will continue. During the second weekend of January, a collection of friends and John’s crew will meet up again. This time we’ll begin the deck construction of the porch. I am excited to learn more, but I hope the day has fewer shocking lessons and I appear a bit smarter.
1 comment: Links to this post

I'm working on a new website. It's for especially for teachers, but most everyone will enjoy it. I hope to have it up and running by summer of 2008. I'll keep everyone posted, so make sure you drop by this blog for the latest.