About a month ago, I watched as men worked for three days to drop a tree in my neighbor’s back yard. For some time the top had been dying, and the massive maple posed a threat of crashing onto the house. What drew my attention to the event was the fact that the endangered house was where I grew up and that tree 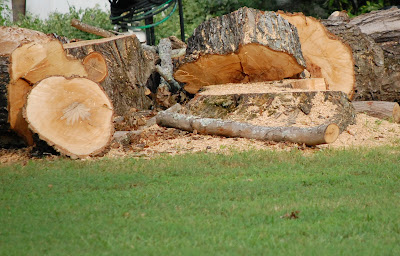 was the sight of hundreds of memories.

That tree played a prominent role in my life during the first day of summer break from elementary school after the sixth grade. Daddy met Jim and me on the last half day and told us to change clothes and weed the strawberries. The patch was located behind the maple, and we spent what seemed to be decades hunched over yanking stubborn weeds from the rows. Like most kids, we weren’t too tough when it came to work, so every few minutes we took a break and searched for shade. That maple was no bigger than six feet and offered only imaginary shelter.
Mother placed a table under the tree during garden season. On it we husked earns of corn and set containers of broken beans. One year Mamaw Rector sat with us boys for a few days, and we spent afternoons breaking beans as she told us stories about our dad as a boy and young man. She called my older brother aside and gave him some change to buy his cigarettes. She was more aware of what we did than we knew.
I’d never completed a pull-up during high school. A few years later, I decided to change that. One branch on the maple was low enough to reach, and my hands wrapped around it perfectly. Before long I chinned myself for the first time, and by the end of the year, I could do 20 reps with hands in either position. When the tree was hewn, that limb was more the size of most tree trunks.
When we boys grew into adulthood, mother planned a family reunion. Aunts and uncles and cousins once, twice, thrice removed came from as far as North Carolina and New York and as near as a mile away. The maple offered shade from the summer sun as we set up tables and chairs and ate meals and caught up on events and recalled the best of times.
Grandchildren spent hours with Mother at the tree. They’d sit in the swing with her and talk and laugh and love. Wading pools were positioned, and little persons splashed under her watchful eye, all the time being protected from sunburn by the sprawling canopy.
When Mother ended her battle with cancer, we boys and our families gathered at the house. We cried for our losses but then found ourselves sitting under the tree as stories of what used to be flowed. Late into the night, we shared those memories with only the light of cigarette tips and the sounds of beer cans clinking interrupting the dark and stillness.
Like all things in this life, that maple tree aged and grew brittle and a bit feeble. Eventually, some kind of disease attacked and slowly destroyed it from the inside, its own kind of cancer. Eventually, it was too weak and too sick to recover, and its life came to an end.
Watching such an important part of my life cut down in pieces hurt. Oh, the real pain might have come with the realization that I too have spanned several years and am on the backside of life. That’s not being maudlin; it’s being honest. At some point, I’ll come to an end as well, but my prayers are that I won’t leave for several more years and after making a mark on those whom I love.


That maple tree started off as a young, strong sapling, and over the years it matured and served as the centerpiece of many of our activities. In so many ways, that maple became our family tree.
No comments: Links to this post

How sad is a person’s life when he’s willing to pay for the opportunity to have bulls with long horns run after him? No, this wasn’t that famous yearly event in Spain. It happened in Petersburg, Virginia, where 4000 folks paid $30 a head to be chased by bulls down a quart-mile dirt track at a speedway. Some 8000 others paid an admission fee to watch the madness and possibly bloody goring that might occur. It was the first of ten planned bull runs that will occur throughout the country.
One woman said, "I just didn't want to die, to get trampled by bulls and die.” Then she added, "It was a rush ... a shot of adrenalin."
That seems to be a growing desire of Americans: they want to experience something “more” than what every-day life offers. Millions of people participate in thrill-seeking activities such as skydiving, mountain jumping, and vehicle racing. I’ve never understood any of it. First, why would anyone jump out of a perfectly good plane in order to soar through the skies attached to a piece of cloth? With my luck, the parachute would fail, and I’d hit the ground at approximately 100-plus miles per hour. The fall doesn’t hurt; it’s the sudden stop that causes the pain.
Mountain jumping, as I call it, is a relatively new thing. Crazy people stand on mountain tops and simple dive off. They wear a suit that is designed to catch the wind so that their bodies are buoyed throughout the drop. In truth, these participants look like flying squirrels. 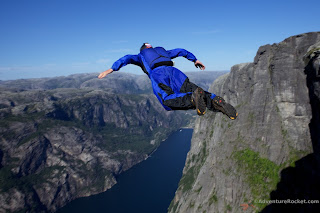 One wrong move and they become “greasy spots” on the rocky faces of the mountains they attempt to fly by.
Other adrenaline junkies ride “crotch rockets” at the speed of light down narrow or around twisting roads. Some people swim with sharks or dive from cliffs in pursuit of that “high” that comes from cheating serious injury or death.
I just don’t get it. Sure, life can sometimes wear on all of us. The demands of work and family can weigh us down. Hoping there’s enough money to meet monthly needs sometimes worries us.
Still, it’s those same low times that make the smallest of things so special. In my way of thinking, nothing is much more rewarding than sitting on the porch on a summer evening and hearing the cicadas and seeing the lightning bugs. Catching a glimpse of deer by the road or on a golf course takes my breath every time.
Being with my kids and grandson and wife is more fulfilling than any jump from a plane or harrowing 200 mile-per-hour ride in a race car. The most exciting things in our lives should be those that involve the family, nature, and home.
I write a blog titled “The Common Is Spectacular.” Many have advised me to change the name since the URL address is too long and too easy to mispsell. I’ve resisted because that title states my philosophy on life. The daily things are the best, the ones that we recall half a century later. The over-the-top experiences in life bring on rushes of adrenaline. However, when the rush from one is done, what replaces it is exhaustion. Our energies are depleted, and we’re left dormant until they are replaced.
It would be nice if folks could find the same happiness being chased by the kids as they do when bulls chasing them. That kind of activity is much safer, cheaper, and rewarding in the long run. I’ll save my energies for these less stressful kinds of adrenaline rushes.
No comments: Links to this post