The last few weeks have been scorchers. They came after weeks of rain and soggy ground. I like the heat, but sometimes, the temperatures feel as if they’ll melt me. In the evenings, just the thought of a dip in the pool is enough to cool me off. It’s the perfect thing to do at the end of a day. 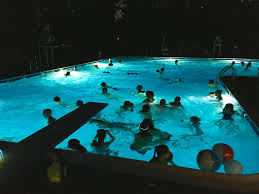 Kids on vacations always love to swim at night. Before the Interstate opened up traffic to traveling speeds of 80-plus miles per hour, folks traveled state highways that wound through towns and the countryside. Air conditioning wasn’t a standard feature in those old cars; instead we used the 4-40 system: 4 windows down as the car traveled 40 mph. The entire family sweated and, kids’ legs stuck to the clear plastic that covered the seats.
Long trips required overnight stays at travel lodges or motor lodges. Families piled out of cars and ran to their rooms. Shortly, they exited in bathing suits and made a B-line to the pool. Night had come, the lights around the pool were burning brightly, and bugs were attacking the bulbs and human flesh.  Children jumped into the water with squeals of delight and sighs of relief. Dads might hop in as well, but only under the pretense of keeping the children safe. More than once, parents shushed the children as they got too loud, and before long, the groups walked back to rooms. Parents smiled with the knowledge that pool time would sap little one’s energy enough to make them fall asleep quickly. 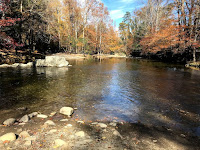 When we were young, vacations consisted of a week’s stay at King’s Cottages, located on the other side of the road from the Greenbrier entrance to the Smoky Mountain Park. For the next seven days, we lived in the water. Days started with breakfast, and then we walked to the swimming hole. For the next few hours, we swam under water, dove from the large rock on the other bank, and skimmed rocks on the water’s surface. After lunch the bunch of kids walked to different areas and rode the rapids back down to the cabin. Instead of inner-tubes, we wore cut-off jeans and old canvas tennis shoes. Our backsides were sometimes bruised and sore, but the fun of scooting down the white water was worth it. 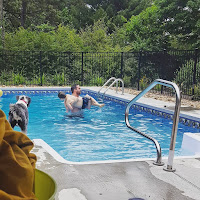 At night, we returned to the river. The cooling temperatures of the evening made the water feel warmer, and we swam by the light of the moon before walking back home carefully so as not to stub toes on rocks. We rarely moved in our sleep because the sun and water had wrung out every ounce of energy.
These days, Amy and I spend as much time as possible by the pool every day. If the day demands too much of our attention, we know that the evening will allow time for swimming. I don’t enter the water as quickly as I used to do, but I still take a modified “Rector plunge.” My interests are no longer in diving or swimming. Instead, I let go and try to become as weightless as possible. Floating as I watch the traffic on Ball Camp Pike or watch the stars come out of hiding is the perfect end of a day. That dip in the pool is where I lose the aches and pains that this body of mine offers at the end of the day.
Whether I was in a motel pool, the river, or the pool in my back yard, one thing has remained the same: my night’s sleep is always better after visiting the water. Oh, these days, I still crawl from the bed too many times during the night, but the sleep is still sweeter after the pool. I’ll be there again tonight and every night until the weather turns too cold or the leaves become too plentiful to keep out of the water.
No comments:

Another July 4th celebration has come and gone, but this last one was much different from those in the past. For the first time in our history, the nation’s birthday was used as a centerpiece for praising militarism. Don’t get me wrong; I proudly support our armed forces, troops, and veterans. However, other days are on the annual calendar for celebrating those things. What happened on July 4, 2019 was that a reality show showdown took place. In one corner was the president; in the other was A Capitol Fourth Celebration. So many differences between the two were apparent.
The crowds were both large and hearty. The president’s turnout was tempered by downpours of rain and thunderstorms. Spectators were covered with ponchos and umbrellas, and many headed for the exits. Later in the evening, the other crowd dealt with a few showers, but nothing like the deluge from just a couple of hours earlier. The Lincoln Memorial crowd was wowed by all sorts of war planes, along with road-crushing tanks and other armored vehicles. The president read off the prompter an elementary, historical tale of our country, complete with some gaffes that still have folks shaking their heads. Capitol crowds were entertained by the Muppets, who have for 50 years taught children to count, read, love, and accept. Additionally, well-known entertainers, as well as new talents, sang, danced, and talked about our great country and the many reasons that we have to be hopeful for the future.

What many are confused about is the reasoning for having a new type of gathering for July 4th. For years, A Capitol Fourth has thrilled crowds and swelled their souls with pride and thankfulness. The new event displayed the mighty show of force at the disposal of the country, but rolling out such equipment made the thing look more like something we watched the old Soviet Union do on a regular basis. Was such an extravaganza worth the millions of extra dollars it took to put the thing on?
All loved the fireworks, at least until the overkill ruined them. The mixture of storms, clouds, and too many explosions obliterated the view of the finale. Just like in so many instances, we seem to screw up a good idea by trying to “one-up” a similar type of thing.
Still, the 4th is a day to celebrate liberty. Americans no longer found themselves subject to the whims of a dictator. Over the years, folks in this country have been able to express their beliefs and to disagree. However, in times of distress, they put those differences aside and stood united in defense of this country. Whether you were a weapons fan or a Muppet fan, I hope you enjoyed the latest celebration of this country’s independence. I pray that we will continue to enjoy those gifts that the founding fathers gave us, and I hope that we will be able to join as one should any person or country ever try to take away those liberties which we love and celebrate every year on July 4th.
No comments:

Nothing is much better for us older folks than to occasionally discover new ways to enjoy things that were once so much a part of our younger lives. That happened just the other weekend, and it’s thanks to my nephew Brandon that things worked out as they did.
Years ago, our family always enjoyed having older brother Dallas and his wife come home for a visit. We also looked forward to traveling to Nashville to spend a weekend at their house. Dal had been the father figure in our lives from the day that Daddy died in 1965. That must have been a heavy burden for a boy of 18 to carry so early and for so long.
In Knoxville, all of us settled in around the large round table in the kitchen. We drank coffee, beer, and cokes by the gallons, and snacks and meals filled the table. When Mother was still here, she always put on a giant pot of pinto beans and made a cast iron skillet of cornbread. Dal and Brenda usually arrived in Knoxville late on Friday; meals were served way past supper time, but no one minded. 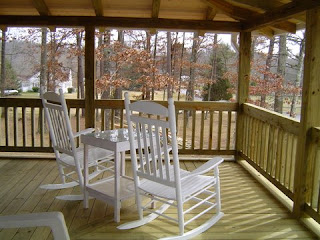 Sometimes, Jim, Dal, and I would climb in the car and travel to Clinton Highway. We’d drop in at the Krystal and by a couple of dozen hamburgers and several orders of fries. At home, we spread everything on the table and dove in. Nothing was ever left.
In Nashville, we’d order food in, cook hamburgers, or go out for a meal. Usually, Dal had a new place that he wanted us to visit so that we could listen the to the musicians who performed. For such a quiet, shy person, he made friends with so many local performers, and he supported them with his presence as often as possible.
The center pieces of all our gatherings were large tables and music. Many times, we sat together until late in the night on a screened porch. A variety of conversations on all sorts of topics took place. Also included were jokes, many of them slightly off-color or offensive in the view of others. That made no difference to us; we just wanted to spend time together and enjoy each other’s company.
Behind it all were the steady rhythms of music playing. Dal loved all genres and had stacks of vinyl records and cassette tapes. He introduced us to the latest country artists and popular folks like Jimmy Buffett or Dan Fogelberg. Even after the rest of us dragged our weary bodies to bed, big brother would continue to listen to that music.
Brandon contacted Jim, my son Dallas, and me about coming to his house. He stated that the evening would include drinking beer, talking, listening to music. We jumped at the chance to do just that. When we arrived, Brandon ushered us to his covered deck outside. He’d bought plenty of food as well, and we sat down to eat with music playing loud enough for the neighborhood to also enjoy.  We listened, joked, laughed, and talked the evening away.
The get together at Brandon’s house was the first time Jim and I and our sons had been together at some place other than a ball field. It was a memorable time. I discovered that my son Dallas and Brandon have many things in common. I learned that my nephew is a funny guy who can keep a group laughing for hours. I also saw that Brandon is as much a music lover as my older brother was. He literally has thousands of songs, although his are housed in a cellphone library.
I can never express to the three just how special the evening was. Brandon said he thought about Uncle Dal and how much he enjoyed that kind of time with family. I’m pretty sure that my brother’s spirit was right there among us and approved of renewing a tradition that was so important to us. It’s nice to include the next generation.
No comments: