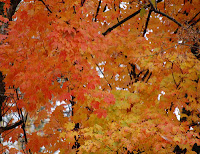 The last week ushered in the coldest temperatures yet of the late fall. I suppose it’s about time since we’re fast approaching the middle of November. Still, it’s fall that drives me crazy sometimes.

For one thing, frost sneaks in during the early morning and hammers those plants that Amy has babied and fed and watered so faithfully since spring. With only one visit, blooms wither and turn brown, and it’s off to the mulch pile or burning area for them. Their ends are sad.

A couple of years ago we bought rain barrels to catch water from our gutters. The things can come in handy, but setting them up in spring is a pain and even worse is when cold weather demands that they be removed. The spigots on both barrels grudgingly give up the water inside, and it can take an hour or more to drain them. Then the downspouts for the gutters must be reattached. Failure to put these giant watering cans away can result in their splitting as the water inside freezes, and I sure don’t want my wife mad at my laziness.

So far this fall, I’ve worked with leaves four times. The yard is filled with trees, and while the maple trees cooperate by dumping their leaves all at once, hickory trees drop giant brown husk-like things that don’t easily grind. Then there are the oak trees. They never cooperate. Instead, they dribble leaves from the first cold snap. Each year I work with those stubborn dead things until January. Then, I give up and take care of the lingering ones when the mower reappears in early spring.

On the news I watched a story about some snobbish neighborhood whose residents had grown tired leaf blowers. They’d started a petition to ban the use of them because they produced too much noise. One woman, I think she once played Cat Woman on the old “Batman” television story, proclaimed that the use of blowers wasn’t necessary. This snarly old girl obviously has never worked in a yard filled with leaves. She probably hires a gardener to complete the work and to do it in a manner that wouldn’t disturb her entitled lifestyle.

I don’t hate the fall leaves. Reds and golds against a cloudless blue sky present a scene that proves that a higher power is in charge of things. In fact, maple tree leaves that turn those colors are mainstays of fall and the Thanksgiving season. They’re the ones that elementary school children apply with crayons to the art work in classrooms.

Just the other day, another fall event caught my attention. I pulled to the side of the road in our neighborhood and watched several turkeys as they picked at the ground of a yard. The appearance of wildlife in the fall searching for food always thrills me. Deer in the median along Interstate 75, while dangerous when they run in front of trucks and cars that zip by, are some of the grandest features that the area has to offer tourists on the way to Florida. For me, seeing those creatures is just another part of the cooling season’s approach.

As labor intensive as the fall is, it still beats the coming months of winter. When frigid temperatures trap me inside, I’ll long for the days when I spent time outside working on those jobs that sometimes irritate me so much. I’m actually grateful to be alive and healthy enough to enjoy the out-of-doors, regardless of how much work is involved. Besides, before long, spring and summer will arrive, and then I’ll again enjoy the seasons and work I love the most.