I fetched the paper the other morning, and my eyes were drawn to a front 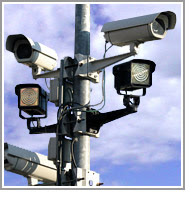 page article: “Traffic Camera Vendor Sues City.” It’s not so amazing how the truth surfaces on so many things if we’re just patient.

American Traffic Solutions, Inc. filed suit in Chancery Court. The company says that Public Acts 425 is unconstitutional because it doesn’t allow for issuing of tickets for illegal right turns if the only evidence is traffic camera video. This company squawks about the unfairness of the law and over the contract violations by Knoxville.

It’s a funny thing to me that ATS manipulated the legislative process as it developed a business that monitors driving habits and mistakes of citizens. However, when a new law that goes against the company’s self-interest is enacted, its officials cry out over the injustices done to them. Hey ATS, karma’s a bitch!

I’ve been a victim of those cameras during a right turn. At Morrell Road, I pulled up to the light, looked to the left and saw nothing coming, and made the turn. SNAP! I received a citation and accompanying photo in the mail, and then I watched the video online. Yep, I sure did “roll” past the white line at the light. Yep, I did turn right. Nope, I didn’t endanger anyone. The truth is that not a single car was coming from the left nor did the right turn I made in any way present a danger to other motorists.

A further look into the situation indicates that these cameras are more about revenue than safety. Sure, some grinding wrecks have been prevented as motorists jam on the brakes to keep from going through red lights. However, I’m curious how many rear-end collisions have occurred because of such quick stops.

Knoxville has cameras at fourteen intersections throughout the city. Since the PA 425 was enacted, a NINETY percent DROP in citations has occurred, and Farragut’s citations have decreased by fifty percent. Hmm. That statistical evidence seems to indicate that the overwhelming majority of fines were levied for right turns that didn’t take into account the flow or traffic or the overall driving habits of victims.

So, now the vendor is filing suit to continue issuing citations where cameras were in place before the new law came into effect. Oh, I see, ATS wants to have its own exception to the rule so it can maintain revenues produced on the backs of Knoxville citizens. At the same time, they pooh-pooh any changes or exceptions in laws that benefit those who pay for their profits.

Yes, the roads need to be safe places on which we can travel. Folks who run red lights should be ticketed for putting theirs and others’ lives in danger. However, a system that monitors intersections must include a key component that American Traffic Solutions cameras and staff ignore. Common sense should be used in looking at the overall traffic situation, and if no dangers are present in a situation, then shutters should remain still. In the end, the traffic will flow much easier, and what looks like a form of George Orwell’s “Big Brother” won’t be squashing common folks.

As for American Traffic Solutions, stop whining. Your profit taking doesn’t supersede the laws that are enacted to protect the citizens of Tennessee. Like I said before, what goes around comes around.